The Story (and recipe) of Torshi-ye Shah Pasand

For 2-3 big jars. As one is never enough.
This is an unusual torshi as the ingredients are boiled in the vinegar. It is sweet and rich and syrupy and incredibly moreish.
There is a little story behind this pickle, which I shall relate to keep you occupied whilst you are waiting for your ingredients to cook…

Once upon a time, many pickle jars ago, in the Spice Lands beyond the River Tigris, there was a small but jolly kingdom, ruled by Amir, a small but jolly shah. He had a small but jolly fiancée, and they were very much in love. He had but one fault: he was incredibly clumsy. He’d climb on his horse…and fall off the other side. He’d pick up his sword…and accidentally slash half the soft furnishings. He’d try to be solemn and ceremonial at solemn ceremonies…and then he’d trip down the steps. In truth, he was a bit of an embarrassment as national figureheads go, but his people loved him, and his reign had brought unprecedented peace and prosperity to the kingdom, so they pretended not to see all the goofball stuff. 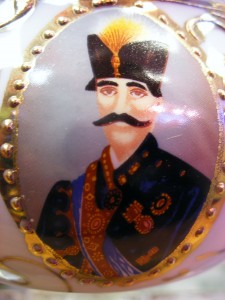 Anyway, the recipe passed down through the generations, across the borders and over the sea, and now seems to belong entirely to Mr. Moghadam, one of our suppliers. He is neither clumsy nor royal, as far we know, but he does make exceedingly good pickles.
Ingredients:

Wash and prick the aubergines, removing the calices; likewise the chillies. Chop the white part of the spring onions roughly, reserving the green bits for salad or some such. Then place these three ingredients in a big pan with the spring garlic, beets and garlic garlic, add the vinegar, put the lid on and bring it to the boil. Turn down the heat and allow to cook gently for one hour before adding all the remaining ingredients. Set to simmer for a further half hour, and then turn off the heat and allow to cool. The trade secret behind this luscious pickle is to leave the lid on the pan while the stuff is cooling: this keeps all the goodness in. Only when it is cold should you ladle it into sterilised jars and seal well. The pickle is ready straight away, but better after about a week.
*On spring garlic:
The stuff we’re talking about here is allium hirtifolium (you’re impressed, no?), or Persian shallot (moussir in Farsi). The nearest thing to it is spring garlic (green garlic). You can buy it dried from Middle Eastern shops: it is most commonly reconstituted to use in ‘must-e-moussir’. If you can’t find the dried form, either use 200g fresh spring garlic, or just increase the amount of garlic and spring onions accordingly.