Wherein we propose to paste cuttings, reviews and links. And maybe some photos of Veggiestan events and banquets.

Have you cooked from the book? Take some photos and send them to us and we’ll post them up here. Have you any comments (*ahem* constructive ones)? This is the place to leave them….

5th October 2011: Veggiestan went to Scotland. We wittered on about all things Middle Eastern and vegetarian to the lovely Pennie Latin on BBC Radio Scotland’s Kitchen Cafe. You’re meant to think that we’re all sitting round a table together in Inverness – but actually we were in Portland Place, pretending. 🙂 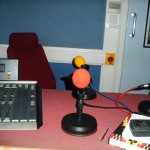 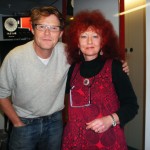 With the rather super Robert Elms 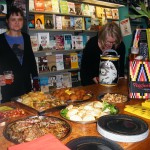 Our spread at the Bookseller Crow in Crystal Palace. 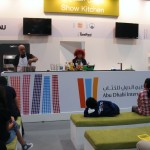 16th November 2011: Veggiestan went along to chat to Robert Elms. You can ‘listen again’ here for a wee while, if you’re bored, like. This time we got a photo to prove it… He really is a very nice chap 🙂

2nd March 2012: We went to meet (chat to) those very nice people at Crow on the Hill in Crystal Palace. We took some mince and slices of quince, and showed them our runcible spoon. And signed some books. Great shop.

28th March – 1st April 2012: Thanks to the lovely people at the British Council, we got to go to the Abu Dhabi International Book Fair as their token cookery writer (the UK was the Country of Focus at the festival this year). This was of course woop-di-doop exciting for a number of reasons, not least of which was a chance to spend some time in Arab-shire. It was kind of intimidating demonstrating Veggiestani food in one of its component countries – but everyone was very kind. Mr. Shopkeeper is just about speaking to Mrs. Shopkeeper again after a rather boisterous trip into the desert (her idea, of course) failed to agree with his constitution (jeep safari meets Alton Towers)….

BLOG ROUND-UP -here’s some kind things that people have said about the book so far. Not that we’d want them to influence you. You should really buy the book and make you own mind up….

Ooh – now that Veggiestan is out in the US (in disguise, thus), we are getting some reviews from over the pond. This is very exciting. Hello America! *waves* Here are a few of them:
From In Mama’s Kitchen;
From the Rocky Mount Telegram;
From the Barre Montpelier Times Argus

50 Responses to The Veggiestan Scrapbook