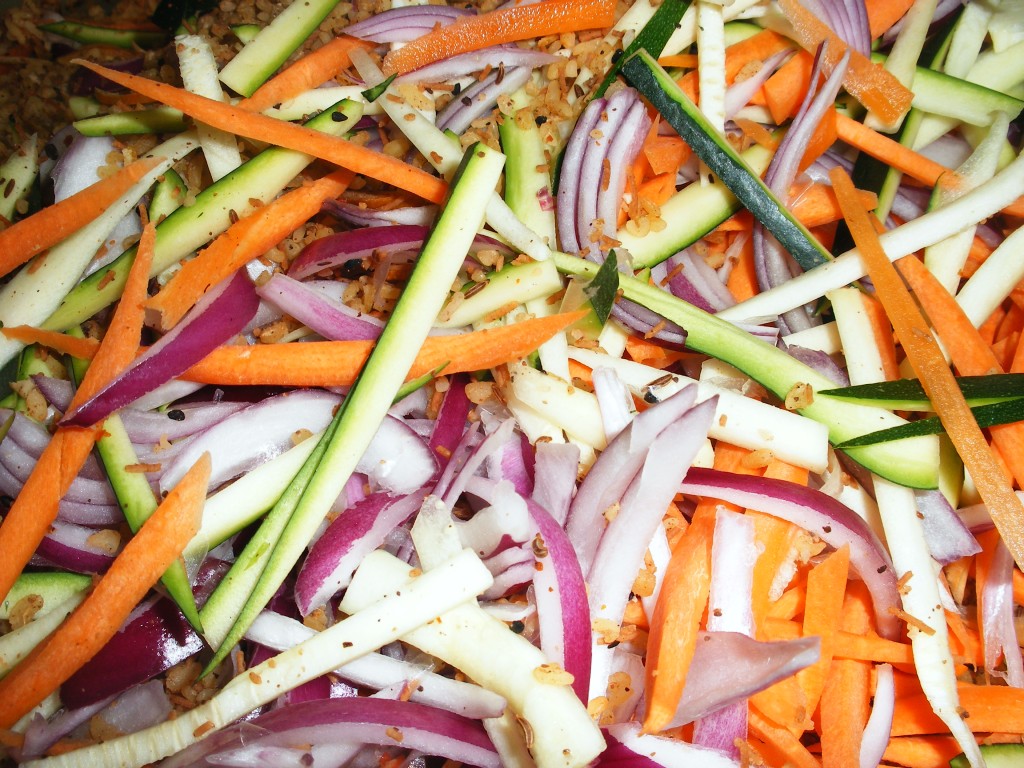 Now that it has gone off our restaurant menu, or, more importantly, now that Mrs. S. has an hour spare, we hereby offer our much sought after recipe (well, one or two people have asked) for our take on an old Ottoman classic, bulgar pilavi. A fragrant pilav made not with the newer fangled rice, but with the oldest Middle Eastern carb, wheat.* A dish that looks a whole lot better when it’s cooked than our photo of random raw ingredients above. Mrs.Shopkeeper really is a bit shite at photography.

So you place your wheat, noodles and baharat in a heat proof bowl and add boiling water. Stir, cover and allow the ingredients to steam for around 10 minutes, adding more boiling water if the wheat still seems hard after that time (wheat varies so it is hard to offer a generic rule for water volume and soaking times).
Next heat a good glug of oil in a frying pan and fry off the onions and carrots; once they have softened add the spices and courgette, stirring well. Turn down the heat, cover the pan, and allow to cook very slowly for about another fifteen minutes or until the vegetables are just cooked.
Bring a small pan of water to the boil, add the sour orange peel and blanch for about one minute before draining. Add the sour orange peel, salt and pepper to the sauteeing vegetables, stirring well. Allow the wheat/veg combo to cool slightly before ‘massaging’ the spiced veg through the wheat (you will need to use your hands, gloved or otherwise, for this), much as you might couscous. The idea is to get every grain of the bulgur coated with oil and flavour.
Now for the topping. Melt the butter in a pan, add a dash of oil to stop it burning, and then toss in the dates. After a couple of minutes add the spice and nuts, and after a few minutes more add the raisins (alway add these last – they burn quickly).
Heat the bulgur wheat through so it is piping hot, and then serve in a bowl topped with the ‘date and nut fudge’. Serve with yoghurt and salad. You’re welcome.
*Coeliacs and those with wheat intolerance can make a very good version of this with corn couscous or quinoa, whilst barley and rye berries also serve well for those who are not actually avoiding gluten.
**These are Iranian noodles, but you can buy broken vermicelli from most Middle Eastern shops. Or you can cheat and buy our ready mixed wheat and noodles.
I would love to say that rice noodles work just as well, but in this context they really don’t – they just end up soggy and sticky. So if you are off the wheat, just leave the noodles out and maybe use 300g grain instead.