A lovely recipe that didn’t quite make the final cut…
To produce gloop for 4-6
Strange old stuff this, but as it is more or less Egypt’s national dish it seemed important to include it in the realm of Veggiestan. It is also hugely popular in Turkey, and enjoyed in Syria, the Lebanon and Jordan. Er, and Peckham – we sell loads of it. 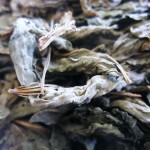 Molohiya (which also goes under the pseudonyms melokhia, melohia, m‘loukhia, molokhia…and Jew‘s mallow) is a mucilaginous green vegetable. That means it looks like viridescent wallpaper paste when cooked: it’s even gloopier than its partner in slime, the okra. It actually consists of the leaves from the jute plant, and in Egypt at least they’ve been eating it since the time of the Pharoahs. It is as nutritious as it is strange, and possessed of a nutty spinachy flavour.
The vegetable in its fresh form is fairly hard to find in the UK – but frozen and dry molohiya are readily available in Middle Eastern shops. If you really can’t find it, you can improvise with spinach, adding a handful of okra to achieve the right consistency.
You will need:

Firstly you need to make some vegetable stock, and whilst I am all for cheating left, right and centre, this is one recipe where it is really much better to make your own. Separate the coriander leaves from the stalks, and chop the latter roughly. While you’re at it you may as well chop the leaves as well – you will need them later. Chop two of the onions, and two of the cloves of garlic, and place them together with the coriander stalks, leek, turnips, bay leaves, peppercorns and the tomato paste into a suitable stock pan. Add about 1½ litres of water, a sprinkle of salt, and bring to the boil. Simmer for about 45 minutes, and then strain, reserving the stock.
In the meantime, finely chop one of the remaining onions, and splash the vinegar on top. Cover and leave to one side.
While the stock is doing its thing, you can also prepare the molohiya. If you are using the dried stuff, scrunch it in your hands, put it in a bowl and then pour just a little warm water on it. It should swell to double its bulk. If you are using the fresh variety, wash it, discard the woodier parts of the stems, and chop it finely (a mezzaluna, or makhrata as they might say in downtown Cairo, is ideal). If you are using frozen molohiya you will need to, um, open the packet (probably best to defrost it, but you can use it straight from frozen).
Bring the strained stock back to the boil and add the molohiya to it: if you are using the dried leaves, you will need to cook the soup for around half an hour – fresh or frozen require just 10 minutes. The molohiya should end up suspended evenly throughout the soup, like an emulsion.
In the meantime, finely chop the rest of the garlic and two more of the onions. Melt the butter (traditionally this would be samna, or semn – clarified butter) in a small frying pan, and add the garlic and onion, followed by the chilli, the ground coriander, a pinch of salt and a couple of goodly handfuls of the fresh coriander. Cook until the mixture (which is called tali’ya, for the food geeks amongst you) is browned, pressing it all together with the back of a spoon – it should resemble a paste of sorts – before stirring it into the soup. Add fresh lemon juice and salt to taste, before serving with warm khobez. Oh, and the onion vinegar thing that you prepared earlier that you probably thought that I had forgotten about: that just gets served as a sort of soup relish.