OK – so this isn’t a food blog in the strictest sense. There’s a lot more to Veggiestan than its collection of recipes. But what finer opening post than an exciting, exotic-yet-simple veggie supper dish? 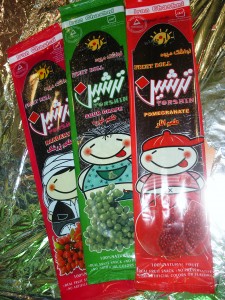 Fruit leather (lavashak in Persian) is literally fruity bits which have been boiled up and dried into a paste. It is enjoyed as a snack across the Middle East by kids big and small. In Arab-shire it is mostly apricots which are used: they are made into a squidgy pulp called amardine which can be eaten as is or dissolved in water to use as a drink. But in Iran dozens of flavours are made, some really sour (sour grapes, burnt whey, sour cherry), and others sweeter (orange, apricot, apple). One’s (supposedly) grown-up husband and his (supposedly) grown-up brothers still squabble over who gets which flavour when Iranian visitors arrive bearing gifts.
Apart from being a lunch-box staple, it is a nifty little thing to have in your store-cupboard, as it can render ordinary food something quite special. Before you ask, it is widely available in Iranian and Middle Eastern stores – or you can call us and we’ll mail order it to you. We’ll be posting some lavashak recipes for omnivores over on our shop website soon.
Halloumi + Lavashak Bake
For 2 as a midweek supper.
Ingredients:
2 pieces pitta bread
2 nice tomatoes, sliced
few leaves fresh basil (or mint)
about 10 slices halloumi
coarse black pepper
1 sheet of pomegranate lavashak (about 250cm sq in area)
olive oil
Split the top layer of each piece of pitta bread lengthways straight down the middle (not at the side, as you would if you were making a kebab), taking care not to cut down to the bottom layer. Gently lift the resulting flaps either side, so that you have a two sided pocket. Lightly grease a small oven dish, and place the prepared pittas on it. Layer some slices of tomato on to the bottom layer of each of the pittas, and top it with some basil, the halloumi and a twist of black pepper. Divide the lavashak in half, and tear it so that it roughly covers the halloumi. Drizzle a little olive oil over the fruit leather before pushing the top flaps of the pitta back so that the halloumi and lavashak are covered. Finally pop a piece of foil over the dish.
Bake at gas mark 4 (180C) for 6 or 7 minutes, and then whip off the foil, turn up the heat and give it 2 or 3 more minutes to crisp/brown.
Use a spatula to serve the pitta pockets: the bottom will be too soft for you to pick them up and eat them like sandwiches. Treat them like open sandwiches instead and serve them with cutlery. Along with a tomato and onion salad and some fresh herbs.
Food geekery: this style of cooking emulates the Iraqi tashreeb, which refers to a range of dishes cooked on (usually stale) bread. Great way to cook: all the gooey goodness of the food gets retained/soaked up by the bread.
© Sally Butcher 2011

4 Responses to Cooking with Fruit Leather