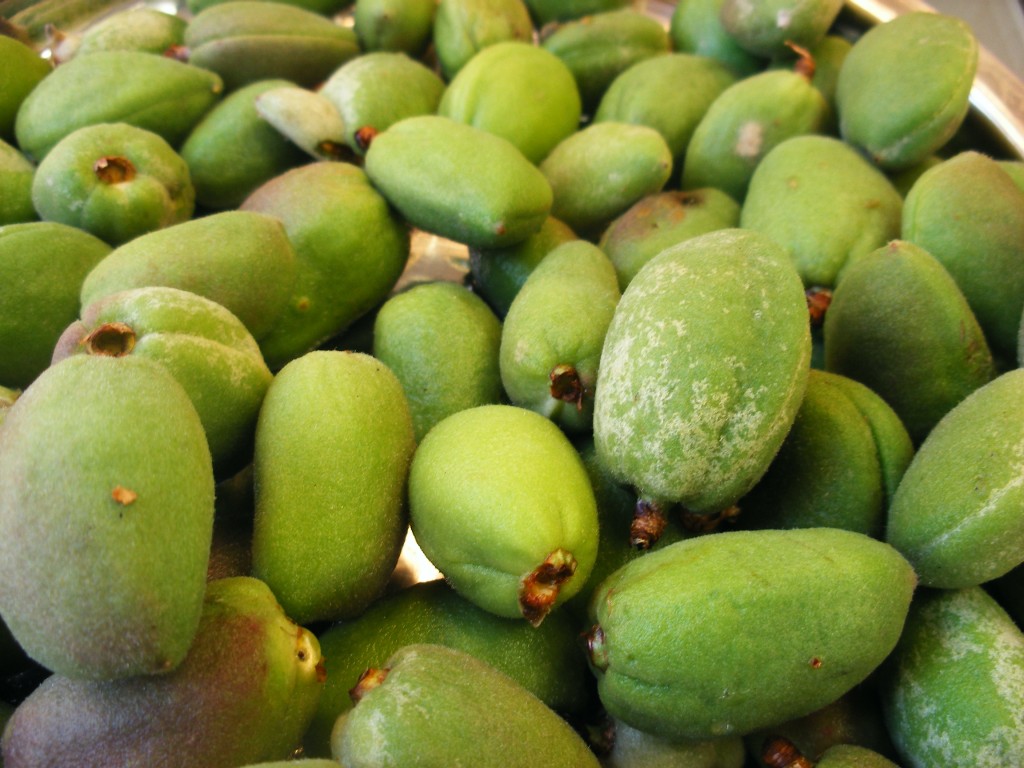 Almonds, right: they come in a hard shell, and they’re brownish. Well, before they get to be hard and brownish, they’re green, as above. And actually soft enough to eat just as they are. In Iran (where they are known as chaghaleh badam) these pass for a great delicacy. People look forward to the start of the season (which lasts about two weeks), and squabble over who gets the last one.
The idea is that you soak them in water for a few hours, rub any excess fur from the skin, then dip them in salt and crunch them. It’s hard to describe the flavour: they taste, well, green. Green and fresh. If you could bottle the essence of Spring and drink it, I reckon it would taste like fresh green almonds.
They are available on the continent and in the States, and are imported into the UK. Keep your eyes open for them: they are in the shops (including our shop) NOW!
Because I am apparently a bit of a daharti (now you know the Persian word for peasant), I quite like adding them to a range of dishes: they are gorgeous slivered on top of a primavera pasta (think peas, asparagus, celery and lots of herbs), for example. They work when snucked into fruit salad, adding an intriguing, sharp crunch. But in the recipe below they get to shine.

Broad Bean and Almond Saute
a starter for 4
This recipe is adapted from one in Persia in Peckham, and it was originally purloined from Tom Norrington-Davies – it is a well-travelled idea, shall we say. And dead easy.

Okey cokey. Firstly fry the garlic in some olive oil before removing it with a slotted spoon. Cube the bread and toss it into the sizzling, garlicky olive oil, and fry briskly until the cubes start to brown. Set aside on kitchen paper to drain.
Cut the whole almonds into slivers, discarding any really woody bits. Fry them in the same olive oil (adding more if necessary), followed a couple of minutes later by the broad beans. After a few minutes more stir in the dill, mozzarella if using, and the saffron. Mix well, season to taste and take off the heat.
To serve: range the tomato and onion around the edge of a dish and drizzle them with balsamic vinegar. Pile the beans and almonds in the middle and top with the croutons. Warm your flat bread of choice to go with, and Ali Baba’s your uncle.