I say I say I say…What did King Tut say when he had a nightmare?
I want my Mummy!
Hm. Ok. Never mind.
Humour in another language is always difficult. There is always the risk that you will laugh like a plonker in all the wrong places, and then completely fail to get it when the joke is on you. A lot depends on idiom and obscure wordplay, and there countless local innuendos which even the guy in the next village doesn’t quite grasp.
During my first few years as an Iranian add-on, I was often the cause of much merriment through my poor linguistic skills, wide-of-the-mark translations and all-round gullibility. As I am blissfully thick-skinned the memory that I carried away from this general ribbing was not psychological scarring but rather delight in the fact that a nation which I had previously perceived as being austere, dour even, was incredibly earthy and, well, funny. Of jokes and buffoonery there was plenty.
Even now I don’t always get the humour in Persian films, but I am starting to understand a bit more about what makes Veggiestanis laugh.
Indigenous Persian humour is conspicuously childlike: comedies of manner and error, and beguiling slapstick compete for attention on the nation’s tellies, Satire is clearly a dangerous pursuit, and exists mostly in the diaspora. It says a lot that one of Iran’s national heroes is Samad, a kind of Persian Norman Wisdom. But the humour that you will hear around a Persian home has a very different punchline. Jokes are as crude as the next man’s and there are plenty about the neighbour’s wife. Now every nation has their equivalent of the Irish joke (the French pick on the Belgians, for example, and the Americans on the Canadians), and for Iranians it is the residents of a Northern town called Rasht, together with Turks in general, who are the butt of their jokes. You’ll get the feel of it if you visit ‘Jokestan’. 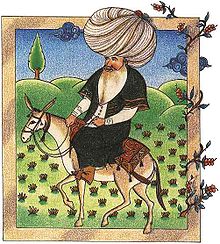 The Turks in fact have a very similar sense of humour. Jokes are often at the expense of the next town or region, and are earthy to say the least. What the Turks and the Iranians also have in common is a deep love for an eccentric mullah known as Hodja (in Turkey) or Mullah Nasruddin (in Iran/Afghanistan). His exploits are recounted with great glee all the way from Istanbul to Kabul. And across the pages of this tome. Part philosopher, part village fool, the mullah was a real character who live in the Konya region of Southern Turkey around seven hundred years ago. To give you an appetiser:
Hodja had lost his donkey, and was running around the bazaar looking for it, muttering all the while, “Alhamdallillah! Praise be!”
His chums were perplexed and asked him why he seemed so happy that he had lost his donkey.
“I am indeed happy,” explained the mullah, “Happy that I was not riding the animal when it vanished, otherwise I would have been lost too…”
In the Arab world, the public face of humour is more guarded owing to the constraints of Islam. Televised humour concentrates on domestic/situation comedy and the battle of the sexes. But things be a changing owing to the rising popularity of stand-up comedy. Even Saudi Arabia has (discreet) comedy club nights, and in Egypt and Jordan there are regular comedy festivals.
The jolliest people in the Arabic world are undoubtedly the Egyptians. Their humour is fulsome, their jokes abundant. The target of many of their jokes are the Saidis, who are mostly farmers and live in the Northern part of the country.
Two Saidis are talking, and one grumbles to the other about how badly he’d slept the previous night. He’d been in the top bunk on the train travelling to Cairo, and as he is a big chap he’d been very cramped.
“Why didn’t you ask to swap with the occupant of the lower bunk?” asks his friend.
Back comes the reply: “Ah, well, there was no-one in the lower bunk with whom I could swap…”
Which just goes to prove that the old ones are the best ones in any language.
This entry was posted in Uncategorized and tagged Hodja, humour, jokes, Mullah Nasruddin, Rasht, Saidis. Bookmark the permalink.