Oud – the smells of Veggiestan

…the land is distinguished in its several parts by the varied odours of the gums which drip from them; for myrrh and that frankincense which is most dear to the gods and is exported throughout the entire inhabited world are produced in the farthest parts of this land…..Indeed the very earth itself is by its nature full of a vapour which is like sweet incense. (Diodorus Siculus, 1st Century BC) 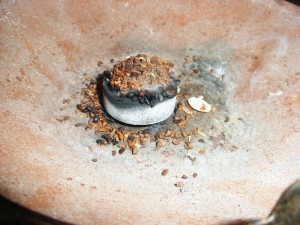 One’s husband reckons one’s collection of aromatherapy oils in the shop are an anomaly. Actually, he suspects that one may be being just a teensy bit self-indulgent by stocking them. That’s the trouble with husbands huh? It’s really quite hard to fool them. It is true that some of the smellies we stock are more redolent of Cheltenham spa than a Turkish hammam. But incense is very much part of Veggiestan, and it has been used across the millennia to perfume and cleanse the air and to ward off bad luck.

Frankincense and myrrh are of course the classic resin aromas of the region and have been for millennia, as Mr. Siculus’ work, quoted above, testifies. They are to be found across Asia, but were originally tapped in East Africa and the South of the Arabian peninsula. They are both, by all accounts, pretty useful things to have. Frankincense is a powerful anti-oxidant, and has strong fumigating properties. Which is why it is burnt in churches and at large gatherings in the region. In fact in parts of Veggiestan, women actually use frankincense as part of their monthly or post-partum ablutions: they wrap themselves up on a chair with a perforated seat, underneath which a brazier of burning frankincense has been set…(no, you couldn’t make that up).

Myrrh has even more medicinal credits to its name: extensive research is currently being carried out as to its potential as an anti-cancer agent, and it is already known for its properties in aiding blood flow. It is also apparently pretty handy for chest complaints. Perhaps the Three Wise Men really were wise. Its sweet smell is probably the reason that it was used for embalming in Ancient Egypt, and it still has vague funereal associations.

The other quintessential Arabic scent is bakhoor, which is traditionally made from agar woodchips which have been drenched in musk or sandalwood. It is very potent and more than a little redolent of ‘70s giftshops (you know the sort – run by confused souls who had relinquished flower power but still embraced all the accessories). It gives me a headache.

In Iran and Afghanistan it is more likely to be esphand or wild rue which is burned, this not so much for its pungent (but pleasant) aroma but more for its reputed ability to ward off bad luck (the evil eye) or preserve a run of good luck. It gets everywhere: weddings, Nowrooz, sick rooms…you can even pay street vendors to burn it for you. Some cornershop keepers in this country swear by it…

All of these are burned over charcoal, and most houses will possess a small brazier kept specifically for that purpose. Which has to be better than plugging chemicals into your wall or spraying them into the air.

This entry was posted in Postcards from Veggiestan and tagged bakhoor, esphand, frankincense, incense, myrrh, oud. Bookmark the permalink.