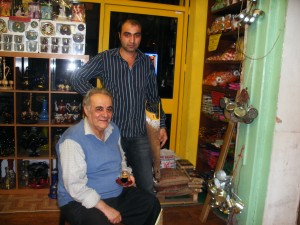 Mr. Mirwais (standing) and the father-in-law.

Our friend Mr. Mirwais helps us out occasionally. He is from a good family from Medan-Shahr, near Kabul, in Afghanistan. And he walked to England.
Well, it wasn’t quite that simple, of course. He fled his homeland to escape the escalating Taliban violence when he was sixteen years old: like many young Afghans, he first crossed into Pakistan, and thence trekked to Iran, where he spent nearly eight years doing a range of odd jobs. More and more of his childhood friends joined him, until there were around fifteen of them: together they decided to cross to Europe where the opportunities for advancement are undoubtedly greater. And so they walked – through Turkey and Bulgaria and Yugoslavia and Italy and France – sleeping rough on the way, and existing on what scraps they could scrape together. Like so many fleeing souls they ended up in Sangatte, the notorious refugee ‘waiting lounge’ in Pas de Calais, and one by one they succeeded in making the crossing. Mr. Mirwais laughs now as he recounts the tale of having a fat little gendarme grabbing his ankles as he tried to leap on to a train…but he also recalls the tears of desperation and fatigue that they all shed along the way.
There are very few tasks to which Mr. Mirwais will not have a go at turning his hand. And, like many Afghans, he speaks at least five languages: apart from his native Pashtun, he learnt Russian from the 1980s invasion, and Urdu and Hindi from his neighbours, Farsi in Iran, and subsequently English.
Do you know, if I spoke five languages and had walked to England from Asia, these would be lifetime achievements: something to brag about. For refugees these accomplishments are life-saving, not life-enhancing, and something about which most of them are very reluctant to talk.
He and his friends remain understandably close: whenever they can they gather for a meal, for there is nothing quite as evocative of home as the collective cooking and sharing of food. In the winter this will be spicy ‘korma’ and warming soups…but as soon as spring is in the air, they grab a portable barbecue and vroom off to the park for a picnic, savouring the company and the air of relative freedom. Afghan spices can be hard to get, but these guys are masters of improvisation.
Anyway, it is thanks to Mr. Mirwais and his mother that we have so many authentic Afghan recipes in the book -an on the website.
This entry was posted in Postcards from Veggiestan and tagged Afghanistan, Mr. Mirwais, refugees, Sangatte. Bookmark the permalink.