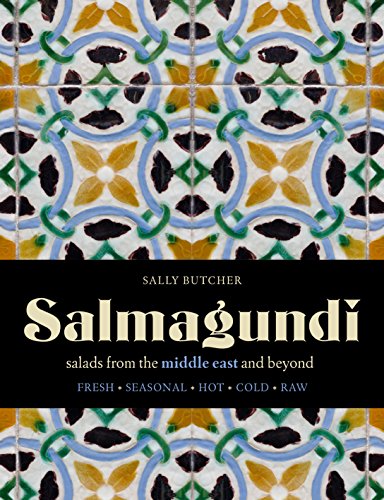 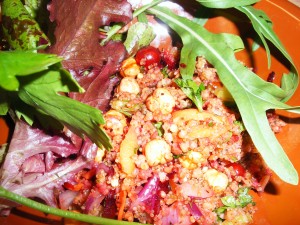 So we’ve got this new book coming out. That’s it there, at the top. For the uninitiated, the word SALMAGUNDI refers to the medieval practice of emptying the pantry into one big composed salad: this happened most often on a Sunday evening, when servants were traditionally given the night off and lords and ladies of the manor were left to fend for themselves (in a stunning early example of Middle Class Problems, perhaps). Anyway, the new tome is a gallimaufry of the world’s salads, old and new. And there is a load of nice veggie stuff in there, as you might expect.
SO to celebrate we’ve made you a salad. This is a lovely recipe, but it didn’t make the final cut as I have only just invented it. This explains too why you are being subjected to this shockingly bad image of the dish: food photographer I am not. You’ll just have to take my word as to how lush it is…
Ingredients (as a side for 4):

Heat the non EV oil in a saucepan until it is sizzling, and then toss in the harissa spice, stirring constantly. After 30 seconds or so, add the amaranth, again stirring well. Amaranth can easily turn to mush if you just boil it – toasting it thus helps it retain its integrity (shame the human race cannot thus be treated, no?). Cook until the grains begin to brown and pop, and then add around 200ml of boiling water (stand back as it will all hiss like billy-o at this stage). Turn the heat down to simmer and bubble for around five minutes or until the liquid is more or less all absorbed and then add around another 100ml boiling water (yes – it is just like cooking risotto): bubble for another five minutes until this water too has been absorbed. Stir well, turn the heat down as low as it will go (use a heat diffuser if you have such a thing), wrap the lid of the pan in a clean cloth and allow the amaranth to steam for around another ten minutes or until it is cooked and fluffy. Set aside to cool.
Tip the grains into a bowl and add the grated and chopped vegetables, red currants and herbs, mixing gently so as not to mash the currants. Mix the harissa paste with the citrus juice, the reserved beetroot juice, flower water and olive oil, and season this dressing to taste. Just before you want to serve, stir the dressing through the salad (grains are thirsty so and sos and drink up the dressing if you pour it on too early).

*What this? You want a bonus recipe. Okey cokey – try this one stolen from Snackistan:
The Snackistan Patent Harissa Spice Mix
This is a very secret recipe, so don’t share it with anyone now will you? You can actually buy similar products in shops now – but it is more satisfying to make your own. Once you have used this spice mix it is quite hard to imagine cooking without it. I have not yet managed to incorporate it into salted caramel, but give me time…
Ingredients (to fill a 300g jar):
2 tablespoons coriander seeds
2 tablespoons green cumin seeds
1 tablespoon caraway seeds
1 tablespoon chilli flakes
1½ teaspoons garlic salt (garlic sea salt is better)
1 level teaspoon smoked paprika
1 tablespoon dried mint
Toast (dry fry) the first three ingredients in a frying pan, stirring constantly: they only need a couple of minutes. Set aside to cool a little.
After five minutes or so, toss the toasted spices with all the other ingredients, and then whizz the mixture briefly in a coffee grinder in batches (or pound in a pestle and mortar). You don’t want it to end up totally homogenised and powdered: some texture is desirable.
Store it in an airtight jar until you need it. Which I assure you will be quite often. Use on fish, chicken, salads, bread, pizzas, lamb, vegetables, popcorn…
**Amaranth is a trendy-but-ancient super grain. It is about as full of protein as a plant can be, so it is useful stuff for the vegan/veggie. And it is gluten free. And it kind of tastes nice. If you can’t find it, you can substitute (the equally gluten-free) millet.

Salmagundi is out on August 7th. You will of course be able to acquire signed copies through our on-line shop and in store 🙂