Fairuz? Googoosh? Who they? A few notes on the music of Veggiestan… 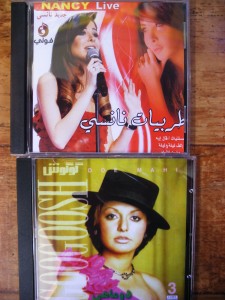 Thought this deserved a mention, as there are a few (otherwise obscure) allusions in the book. This at face value would be a book in its own right, as of course music in the Middle East offers just as much variety as the next region’s, every country has its own speciality, and there are squillions of artistes to take into consideration. Middle Eastern rap. Middle Eastern jazz. Middle Eastern trance. You name it: they’re listening to it. So I shall just content myself with a top 7 of musical people and things you really ought to know.

1) It’s not all belly-dancing. I know, I know – that is always the first image that flits through your head when you hear the opening and distinctive beats of an Arabian tune. If you are lucky you will have seen some of the real authentic stuff: for most of us it is Barbara Windsor who springs to mind. Raqs sharqi (as the wiggling cognoscenti prefer to call it) was originally a means of helping women through the rigours of childbirth. The Ottomans got hold of it and it was only then that it became a source of titillation.

2) Arabic music started as pre-Islamic poetry, and often had mystical associations: the period came to be known as the jahiliyyah, which translates roughly as ‘the period of the ignorance of God’. Whilst most forms of Islam accommodate music, it is still believed by certain sects that it is haram, and that only plainsong devoted to the worship of Allah is permissible. This form of vocal intonation is known as nasheed; if you want a stunning example check out some of Yusuf’s (the artist formerly known as Cat Stevens) work during his years away from public life. Talk about goose bumps…

3) Arab composers work with a melodic system known as maqam which is far too complicated for me to get my head around. What is exciting though is that Arab music theorists were seemingly the first to link maths and music.

4) Thanks to the crusades and the Knights who say Ni!, Middle Eastern musical instruments and genres had a huge influence on medieval European music. Many of our instruments are directly descended from Arab creations: the oud gave us our lute, the tar/zitar gave us the guitar, the qanoun became the harp, and the nay we now call the flute.
Other instruments of note include the daphf (a very noisy, over-sized tambourine), and the darbuka (Egyptian drum), both of which are hugely popular in our shop with male students of a certain age (I swear there is something in the genetic makeup of the average male that means that he is unable to walk past a drum without beating out a tuneless tattoo).

5) The biggest outpourings of modern Arabic music come from Lebanon and Egypt. Big names to listen out for include Amr Diab (pretty boy, lots of lovey dovey stuff, gorgeous voice), Nancy Arjam (everybody loves Nancy), Haifa Wehbe (controversially ‘sexy’), Diana Haddad, Khaled (who’s actually from Algeria) and George Wassoof (from Syria). But the biggest names of the lot are Umm Kulthum, who was the first female Arabic singer of modern times, and Fairouz, who pumps it out like a Lebanese Piaf. That should give you enough ammo for the next pub quiz night. Arabic music is best sampled (if not live then) through the thousands of satellite video channels in the region.

6) Persian Music is roughly divided into two camps: the cheesey pop which is pumped out of Tehrangeles (think lots of hair and teeth), and the somewhat cleverer but less catchy stuff which is produced in Iran. Iranian musicians working in their homeland do not have an easy time of it: many artists have faced imprisonment for their underground activities. All Iranian men adore Googoosh, who is THE Iranian diva (Celine Dion meets Madonna), whilst the quintessential Persian crooner is Dariush (although his songs are all very sad). It should also be mentioned that those Iranian youths who don’t want to be doctors all want to be DJs instead.

7) The best of the rest. Moroccans have arguably the most vibrant modern music scene in Veggiestan: rai and chaaba with their nigh on impossible rhythms are unique to the Maghreb, and were possibly devised just to make tuneless tourists look silly in nightclubs. The Turkish music scene offers a bit of all sorts, but they did win the Eurovision a few years ago so it must be good, no? Traditional Kurdish music is about as lively as it gets – think wild beats and gorgeous costumes – and even in Kurdish pop music the rhythm is distinctive. Sufi music is to be found in many countries of course: notable exponents include Davood Azad. It is characterized by its ecstatic nature: modern trance music has its origins here for sure. Afghan Music (similarly that of Uzbekistan, Tajikistan and Kazakhstan) shows strong Indian and Pakistani influence; the beat is frenetic but jolly. Totally undanceable. Big stars include Ahmad Zahir and Naim Popol.